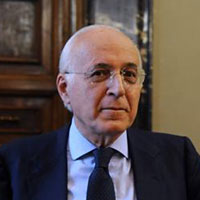 I have the privilege to take the floor after listening with great interest to what you said in this opening session.

Your comments and remarks were really refreshing and will certainly provoke a lively discussion this morning. I thank you for that.

I also thank the Alliance for the Internet for organizing such an important event, and once more the Ministry of Foreign Affairs for your warm and exquisite hospitality.

Firstly, I would like to commend the growing role of ITU, as well as the vision which led to the Dubai Conference. As it was recalled today, the Dubai Conference had the huge task of modernizing and updating the telecom regulations agreed 25 years ago. 25 years means a quarter of a century: a lot of time. The world has changed since then, I would say that it changed many times and new opportunities have been created and then profoundly modified. Some of our hopes and expectations were not fulfilled.

I will only quote in this regard the expectations caused by the dot.com boom of the Nineties and a famous book of some 20 years ago: “Dow36.000”, in which the dot.com success was expected to bring the Dow Jones index up to36.000 in 10 years.

Another famous book brought us back to a Ptolemaic vision of the universe, by telling us that “the world is flat“: flatted by the same extraordinary boom of telecommunications. Personally, I still believe that the world is round; but it is true that our perception of it has quite shifted.

The Dubai Conference has therefore the extraordinary merit of having faced a great challenge, living up to many of our expectations.

I would like to pay tribute to all those who were involved in it, for their commitment and determination, first of all, naturally to Secretary General Touré. I would then like to thank the Italian delegation, many of whom are present here today and will certainly contribute greatly to the discussion.

The second point I would like to stress: the beautiful synergy that we see today between institutions and companies, at this event organized by Alliance for the Internet, hosted by the Ministry of Foreign Affairs and supported by my Ministry of Economic Development. In all economic sectors, but especially in TLC, cooperation with enterprises is crucial. In preparation of Dubai, we have worked to develop a national and European position, taking into account the point of view  of companies, as well as that of other stakeholders, through a public consultation process. This cooperation will also be of paramount importance in the aftermath of Dubai.

My third message: the globally positive assessment of the outcomes of Dubai. On this also I agree with Secretary General Touré. Progress has been made in areas ranging from roaming access to TLC for the disabled. We should not forget provisions in favor of insular States or those State which do not have adequate TLC.

Let me elaborate a little on this and be frank. Our strong commitment in favor of the European integration does not mean that we are always satisfied with the decisions taken at the European level. Let me quote one single example: the multi-annual financial plan approved by the European Council in February. This seven-year financial plan reduced the overall budget, in particular by cutting the funds allocated for the Connecting Europe Facility. The Connecting Europe Facility has the role of promoting the development of infrastructure in Europe in the key sectors of transport, energy and precisely telecommunications. I think that we all agree that infrastructure is the pre-condition for sustainable growth. I regret therefore the major cuts made in the TLC pillar of the Connecting Europe Facility: only a symbolic one billion Euro over 7 years remains. Really very little.

This brings me to my final point: what to do after Dubai. Let me be clear: it will not be an easy path. We all know that 89 countries signed the agreements, but 55 did not. Among the latter, there are the European Union member states and the United States. In the past weeks, many of us have discussed thoroughly the reasons why this happened.

We are aware of the different positions on the internet governance, which is the object of a specific resolution adopted in Dubai. We are also aware of the ongoing discussions on the definition of the most appropriate forum to address this issue.

I am sure that today’s debate will adequately explore these points. As a personal contribution to start off your debate, I would like to mention a few key issues which you could consider in your discussion. In particular, two questions appear to be fundamental:

• To what extent does the current model of development of the Internet will be able to ensure freedom of expression, information, communication?
• How the role of telecom operators may be outlined in this model? basic infrastructures are preparing to become a commodity?

In this context, other specific relevant issues could be considered. Let me mention just a few, without presumption of completeness:

– Availability and accessibility of infrastructure

Dear participants, the floor is now yours for your debate.

But in concluding let me underline that, in my opinion, we do have several strings to our bow.

The progress made by the Conference in the areas that I mentioned seems to be widely acknowledged.

There are two years left to sign the Treaty.

In the coming months and years, Italy will contribute to preserving the unity of the TLC international community. I believe that this task suits us well, given our traditional position as a bridge between different geopolitical areas.

In this regard, we will continue counting on the advice and assistance of relevant stakeholders, including associations, consumers, companies which are all instrumental in advancing the crucial sector of TLC.

I wish you all a fruitful discussion and will take its results into serious consideration.